Is the explorer inside you growling again? Then pack your bags and take a journey which we took to get lost in the lap of nature. Moreover, you don’t even need a day off for this weekend getaway. Never knew that Shasta had so much to offer which is just four to five hours drive from Bay Area. I once heard from my friend, ” Travel often.Getting lost will help you find yourself.” I think I am in that process now. 🙂

Overshadowed by Lake Tahoe and Yosemite, this place might not be the most popular in the list. But for a nature lover like me, it had Peaks, lakes, waterfalls, hot springs and “Caverns”. We also got to see some surprising man-made structures like Shasta Dam and the Sundial bridge.

On our first day we drove to Shasta Caverns and book the tour . The tour started at 12:45 pm for which we needed to step down to the Marina where a boat awaits us, which dropped us to the other end of the lake ,where a bus awaits us.After unloading from the bus, we went through a small museum and then came the door of “Dungeons”(Caverns Gate). If you are a Harry Potter Fan like me, you can relate to it, once you see them yourself. 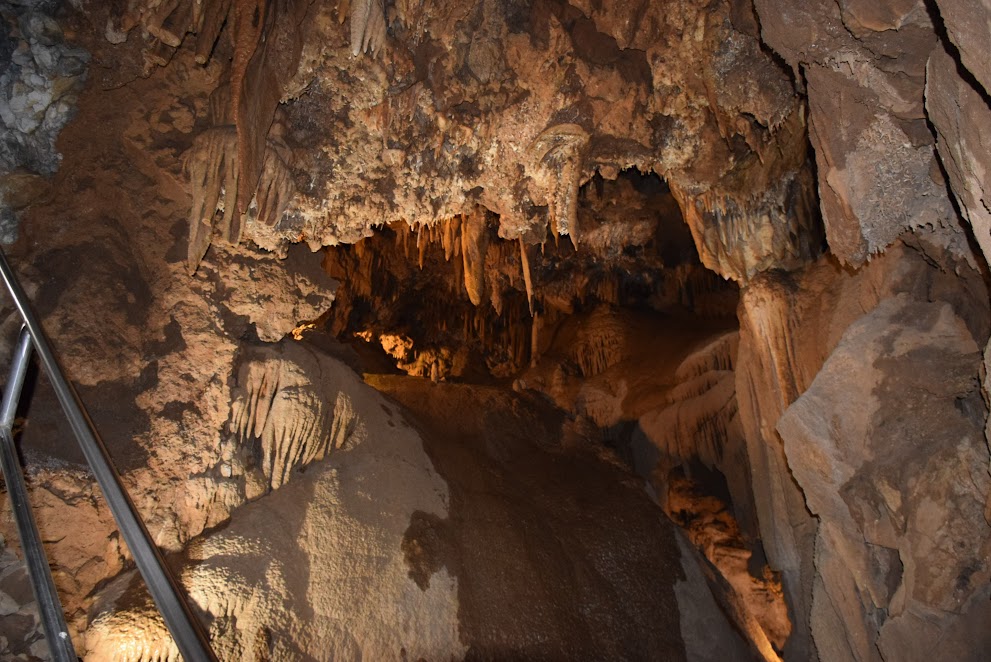 The most amazing thing we all felt that the cave temperature was just 66 degree F compared to the outside temperature of 104 degree F. We were awestruck with the naturally carved figures , besides the stalactites and stalagmites there. My daughter was on the spree of collecting rocks for her show-off in school. We were busy romancing with the caves’ interiors (Though we weren’t allowed to touch any walls 😉 ). 😀 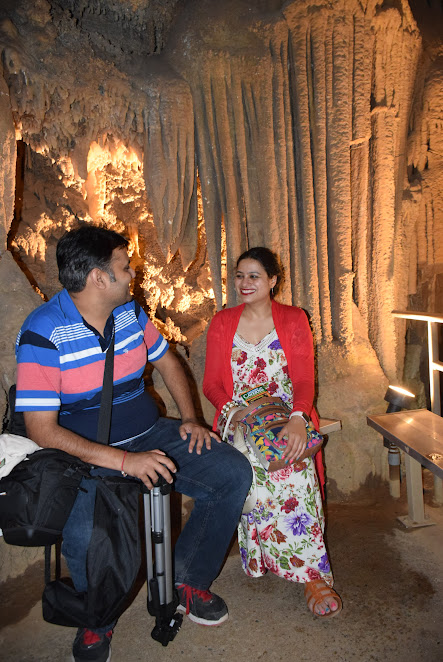 At some points you can see the sparkling calcite rocks, at others red-colored limestone due to ferrous oxide, at some others steep stairs , at some gates blocked openings of the past and so on. In few words, you are in a different world altogether. The pics aren’t enough to describe this mesmerizing place. Immersed in its awe , we failed to realize that we had climbed 650 steps to reach the top of the cave at the exit. 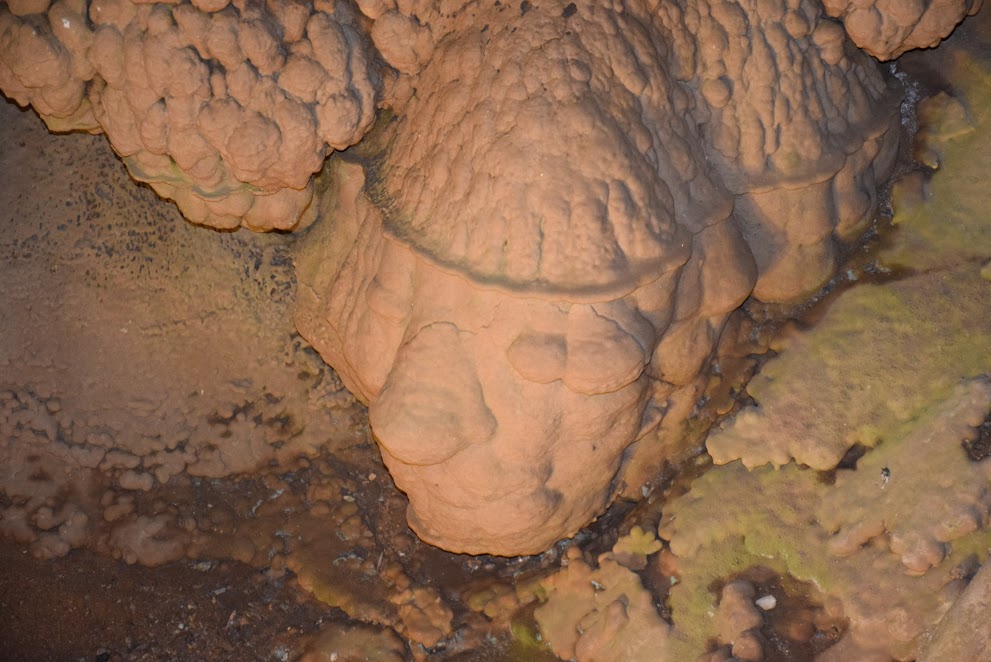 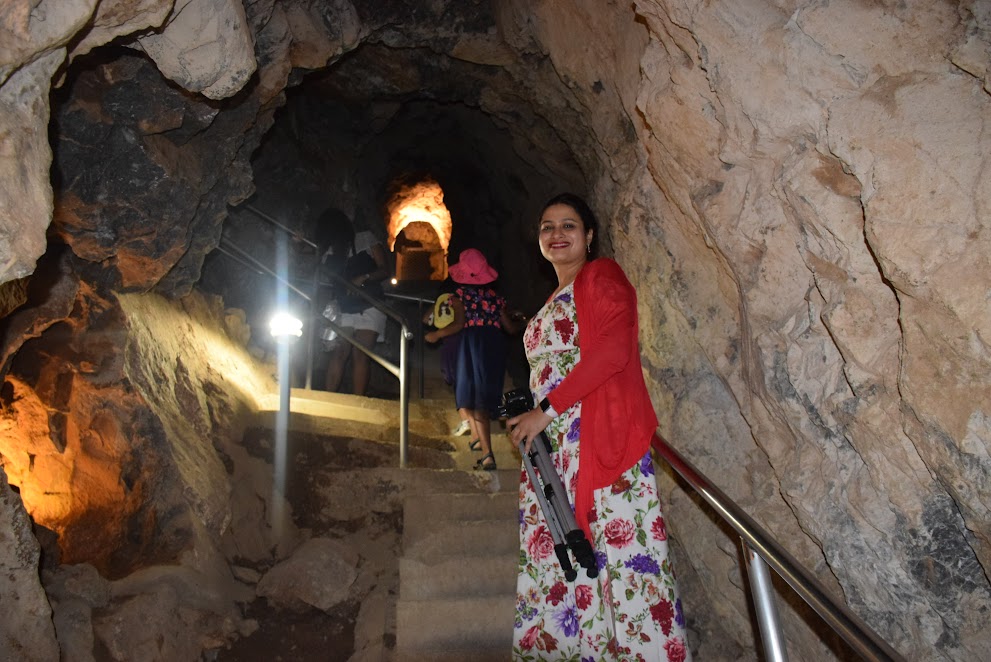 These steps were in parts and were adventurous in some areas with kids 😉 . But climbing down in the blazing sun toiled us more than climbing up these steps. This is a two-hour tour and we were glad to complete it in 2.5 hrs with kids, so boarding the bus to the marina,then a boat ride to the gift shop. 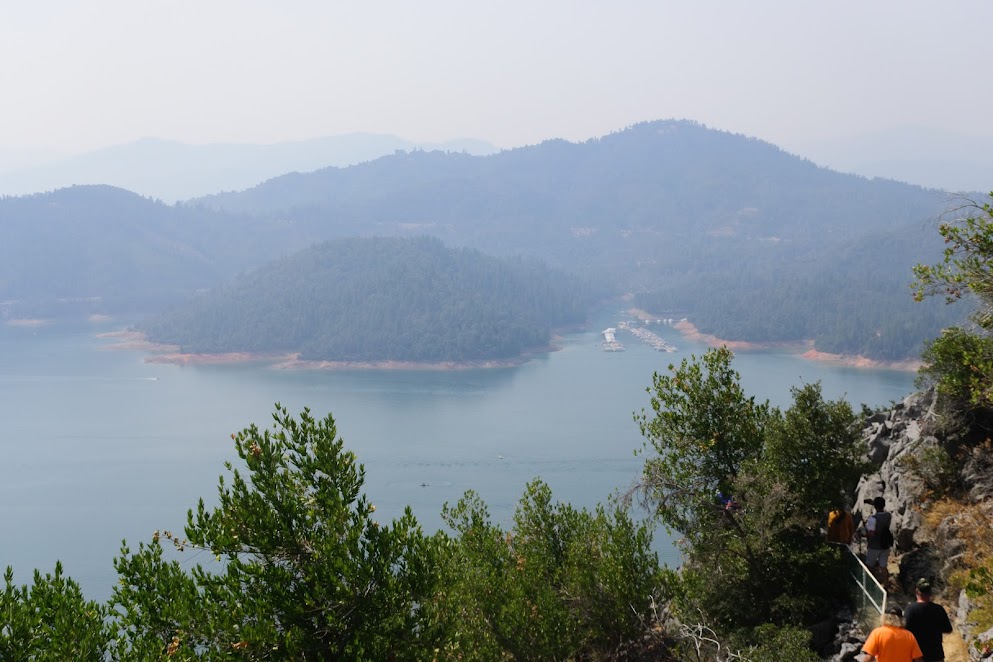 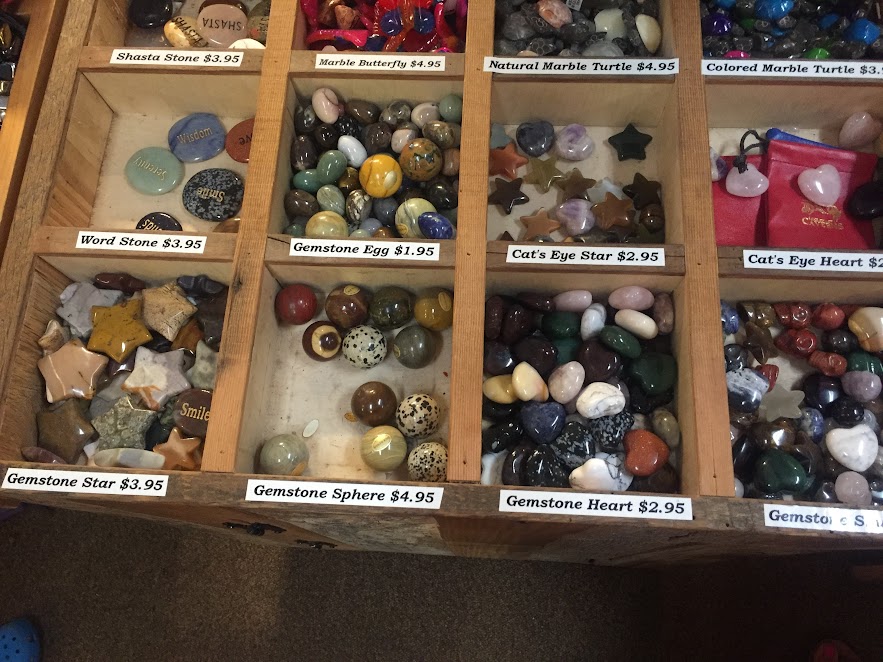 Then we ate our lunch , to-go Palak pooris (Indian spinach puffed breads) with Dry potato curry and pickles. All refreshed we set out for Lake Sisikiyou . On the way we got a glimpse of Black Butte peak and the snow capped Mt. Shasta. This is a great place for relaxation and for those who enjoy fishing, kayaking, swimming in open – a must go. I loved the serenity of this place with Mt. Shasta’s peak in the background. The lake was clear and surrounded by tall trees . 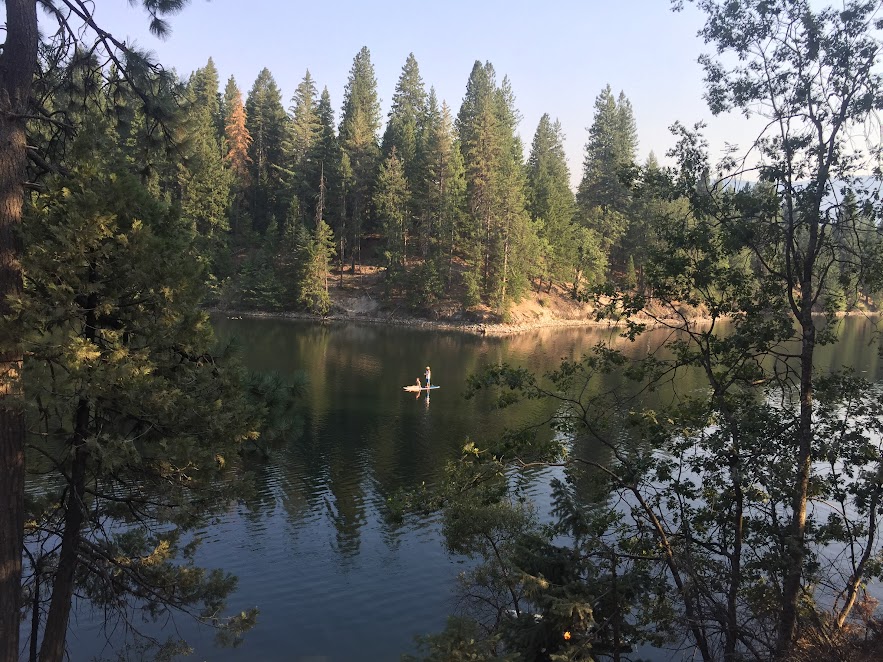 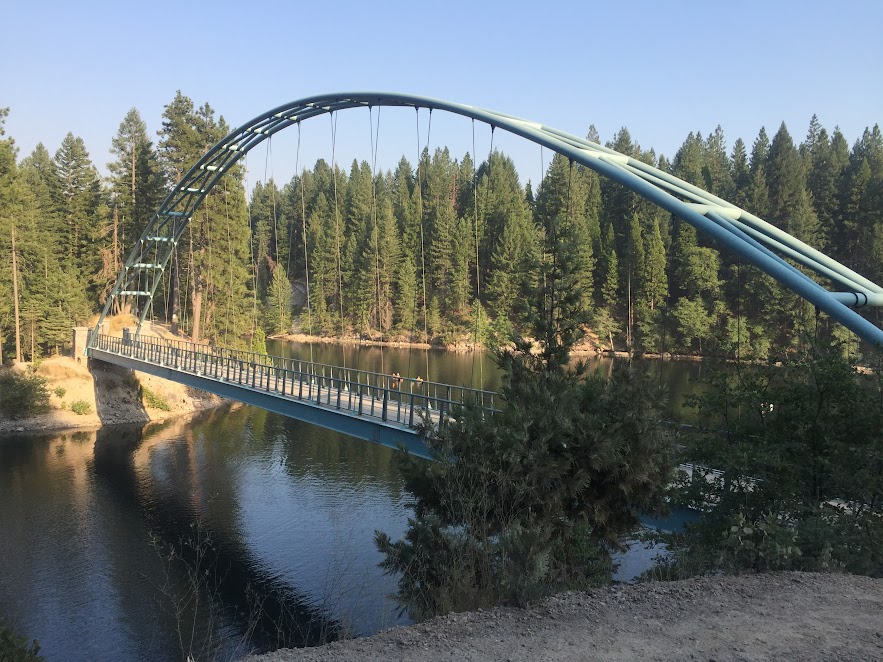 The walkover bridge led to a trail in the Sisikiyou county. We stopped for an hour there and then headed off to our hotel in Yreka.

We wake up to see the Smoky Sun in Yreka, because of the wild fire near Crater lake.

After having the breakfast in hotel, we went to the McArthur Burney Falls. Unlike other waterfalls, which usually need a hike of at least 1.5 miles, these were accessible and involved a very less walk along the trail of about 0.7 mile. At 114 feet height and 250 feet of breadth, they fall magnificently to make a rainbow in the mist. The cool mist and the surrounding air are so engrossing that you feel like the time has stopped in the musical sound of falls. 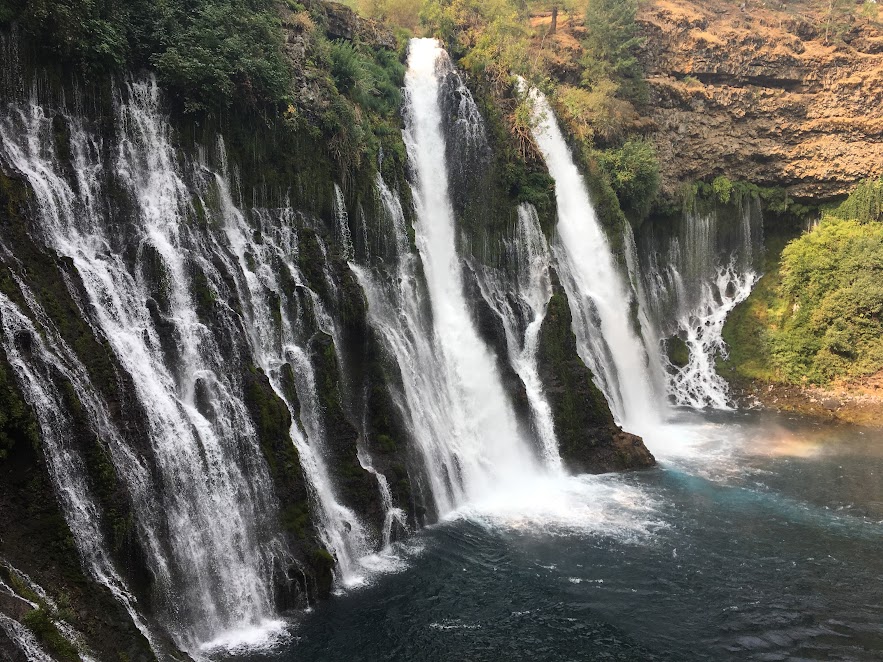 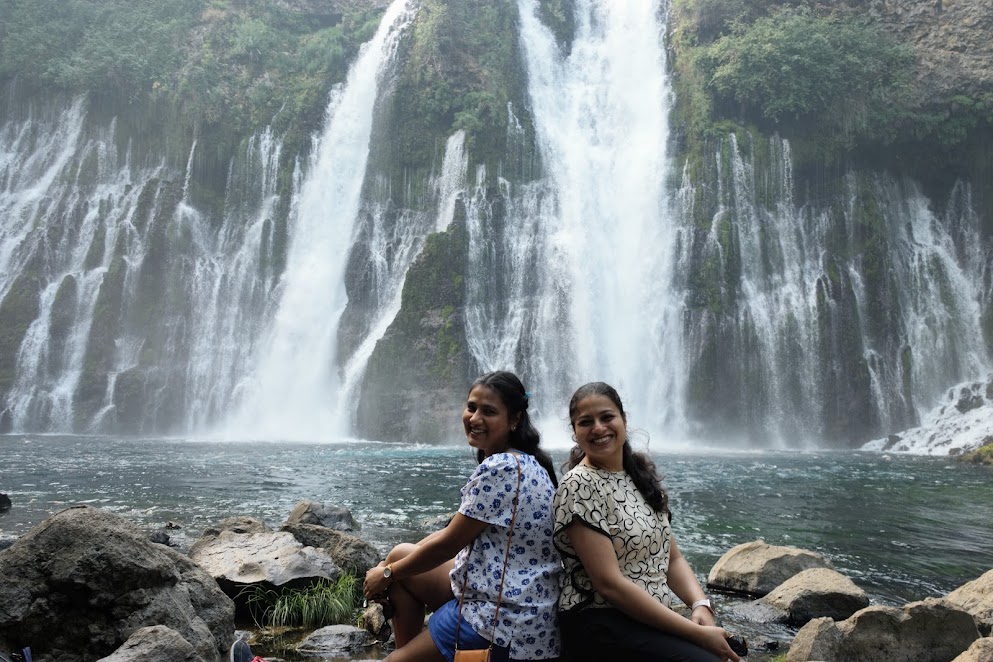 Want to have a live experience, then check this :


Suddenly,the kids’ hunger alarm woke us from our blissful moments and we ate Maggie, subway foot long to head for our next destination- Sundial bridge. From ethereal beauty we were moving to a substantial structure by Santiago Calatrava. 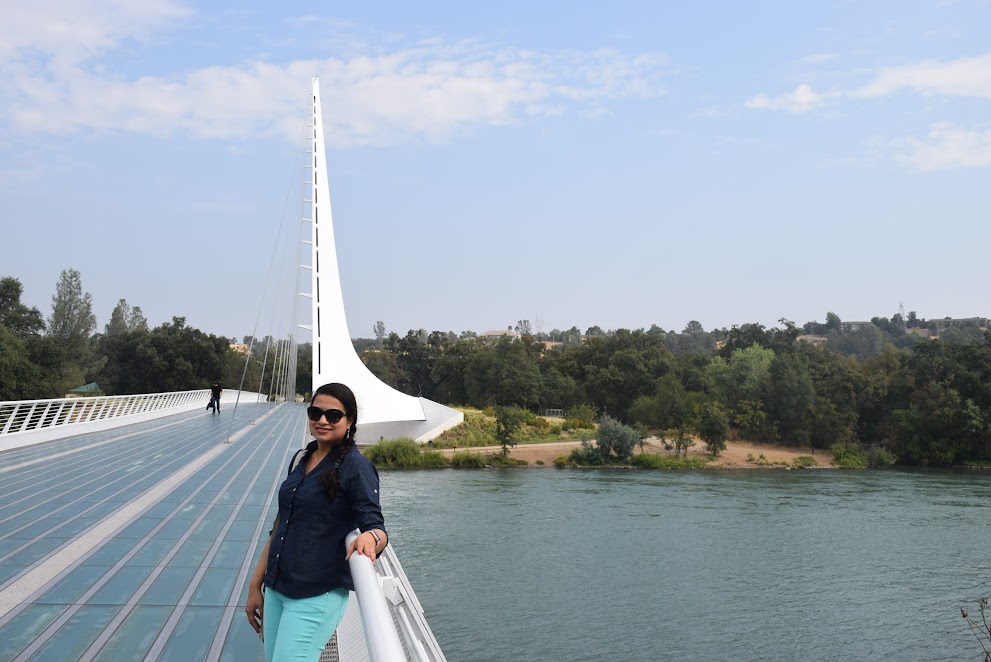 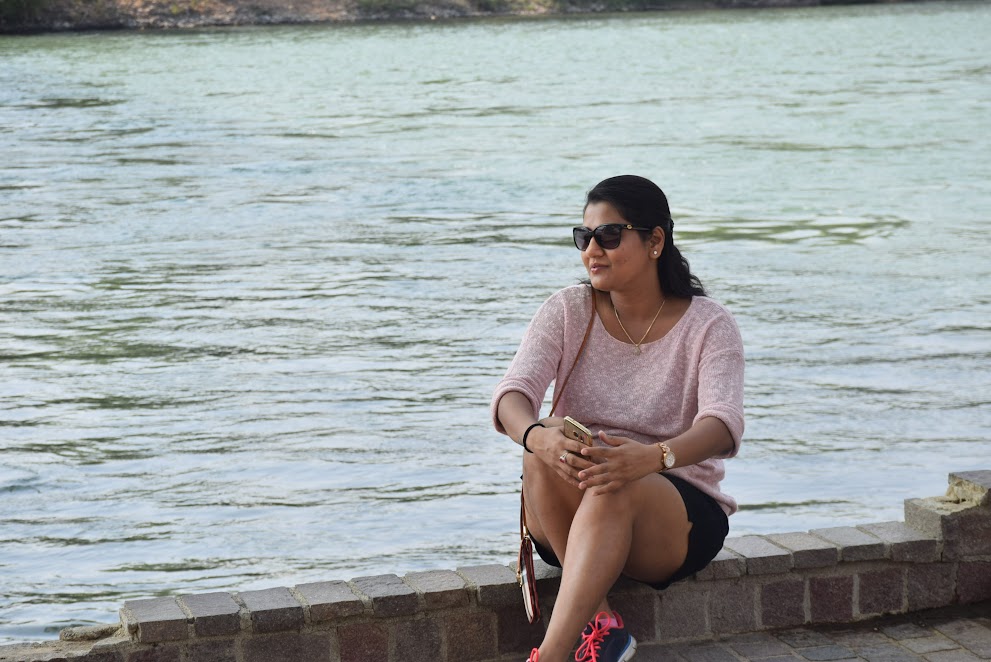 The Sacramento river below and the beautiful design of the bridge are worth watching in Redding. The material of the bridge is cool to touch even in the scorching sun and beneath the bridge the air is cool partly because of the river and partly due to some thought behind bridge’s construction. Here too, there are a few trails and a Turtle Exploration museum and Aquarium to visit. But unfortunately, the museums were closed that day.

Our next stop was the Shasta Dam. Besides the high-end security, the panoramic Shasta lake, the cool underground breezers from the vent, the echoing sound in the tunnel below and the old railway tracks, the tour was profound. It was the second highest Dam in 1945 just next to Hoover Dam in Nevada-California-Arizona junction. The water is used to generate electricity through five mammoth turbines which supply electricity in the Californian factories. 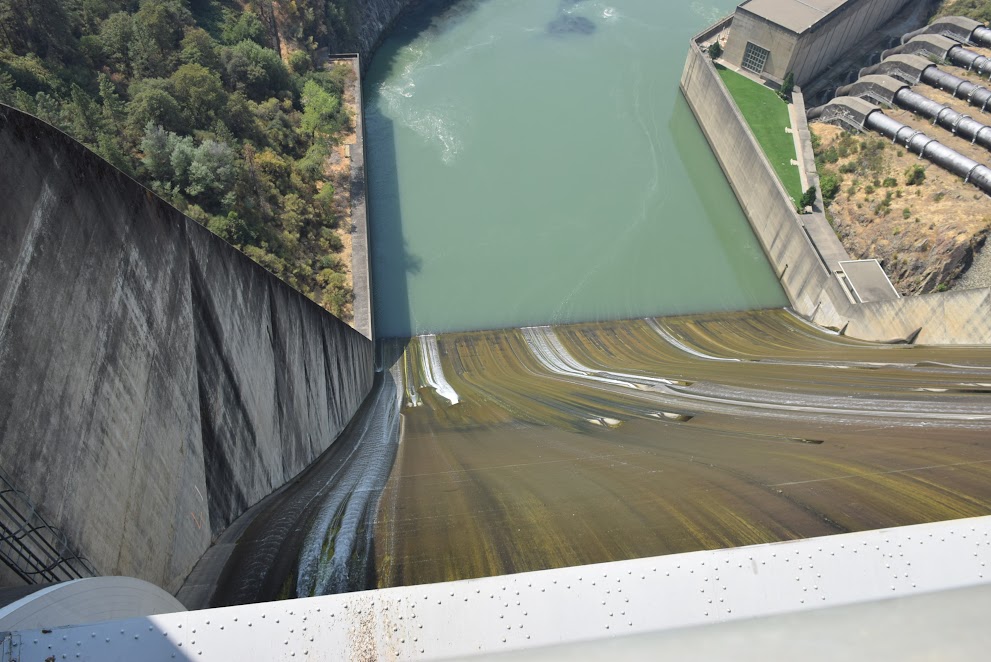 Shasta which was once a Volcanic activity zone, has now been converted to a reservoir of water. The black rocks along the edges reminds us of its past. However, the Greenstone in foundation is already tested by the builders, so no worries!!

You may add Lassen Volcanic National park and Crater lake National park too in this itinerary ,if you have two more spare days to invest in trip. These places are worth visiting and an experience in itself. So get out of your comfy homes and travel ! These experiences help you grow better as a human being. Also don’t forget to share your travelogue with me.

Want to see more pics ?? Please click >> More Pics …….
For any queries , please write to me. Till then keep sharing and travelling…
🙂